Description
#1 New York Times bestselling author Vince Flynn introduces the young Mitch Rapp on his first assignment, a mission of vengeance that made him a CIA superagent.Two decades after the Cold War, Islamic terrorism is on the rise, and CIA Operations Director Thomas Stansfield forms a new group of clandestine operatives—men who do not exist—to meet this burgeoning threat abroad before it reaches America’s shores. Stansfield’s protégée, Irene Kennedy, finds the ideal candidate in the wake of the Pan Am Lockerbie terrorist attack. Among the thousands grieving the victims is Mitch Rapp, a gifted college athlete, who wants only one thing: retribution. Six months of intense training prepares him to devastate the enemy with brutal efficiency, leaving a trail of bodies from Istanbul and across Europe, to Beirut. But there, the American assassin will need every ounce of skill and cunning to survive the war-ravaged city and its deadly terrorist factions.
**********__________**********


For those of you who follow my blog, you will know I don't do book reviews. For those of you reading your first of my "Recently Read" posts, I don't do reviews. I write up a short and sweet little bit about a book that I've read and enjoyed. Sometimes I go into some detail about the book, but mostly I just give you a short, quick reason why I liked the book.  So - here goes...

I will provide links to the book for any of you who might be interested, but I actually listened to the audio version available from Amazon/Audible. Most of my reading is done via audio books so I can do other things while "reading".  For example, during the narrative of this book I picked up and dropped off my kids at school for a week as well as doing some housework and crochet.

Vince Flynn has been recommended to me several times but, until now, I hadn't gotten around to his books.  I have to say, I was not disappointed with American Assassin.

American Assassin is the first book in the Mitch Rapp series and was released in 2010. Yes, I'm slow at getting to most books. I rarely read what's being read by everyone at the moment.

I've not done a lot of research on Vince Flynn and don't know if he's written any other series or stand-alones. I was mostly interested in this series because it was recommended to me and it's about an assassin - go figure.

American Assassin is mostly about the recruiting and training of Mitch Rapp with a mission or two thrown in. The book was very well written and kept me interested all the way through. It's the kind of book I'd like to write, someday. If only I could be more serious for longer periods of time.

I'm really excited to get into the next book - Kill Shot. I have no idea when I'll finally get to it though. I don't normally like to read while I write (I'm currently working on book #6). But, I've given myself a goal for reading that I'd like to keep up on. We shall see if I can manage it.

I would recommend this book for a great escape into a realistic world of spies and assassins. Now drop and give me fifty!

Click here to buy for Nook from Barnes & Noble 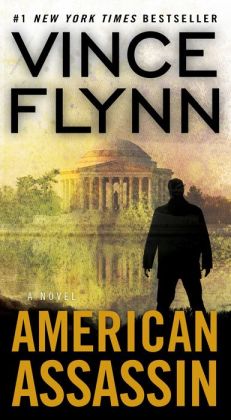 Click here to buy in paperback from Barnes & Noble