Recently Read - The Case of the Missing Marquess: An Enola Holmes Mystery by Nancy Springer

The Case of the Missing Marquess:
An Enola Holmes Mystery
by
Nancy Springer

Publication Date: November 8, 2007 | Age Level: 8 and up | Grade Level: 3 and up
When Enola Holmes, sister to the detective Sherlock Holmes, discovers her mother has disappeared, she quickly embarks on a journey to London in search of her. But nothing can prepare her for what awaits. Because when she arrives, she finds herself involved in the kidnapping of a young marquess, fleeing murderous villains, and trying to elude her shrewd older brothers—all while attempting to piece together clues to her mother’s strange disappearance. Amid all the mayhem, will Enola be able to decode the necessary clues and find her mother?
This is a special Recently Read post put together by my oldest daughter, Alexandra.
This book is a twist to the story of Sherlock Holmes.  Enola Holmes, much younger sister of Mycroft and Sherlock Holmes, may look a lot like Sherlock but acts a lot like her rebellious mother.

Her mother loves ciphers.  In fact, Lady Eudoria Vernet Holmes named her daughter "Enola", a cipher in itself.  Enola turned backwards is alone.
This story begins when Enola's mother goes missing, leaving no other clue than a cipher book and a book on the meaning of flowers.  Eventually, Mycroft decides to send Enola, who hasn't had any schooling in the "lady-like arts" of the late 1800's Britain, to a lady's boarding school.  Rebellious Enola will not have it.  She promptly finds her mother's cache of money, that had been stored for Enola, and runs away.

On her way across Britain she decides what her calling is.  A consulting "perditorian", as she would put it.  She then proceeds to London where she begins here quest of finding the lost - including her mother.  She does all this under Sherlock's and Mycroft's noses.

If you like mysteries such as Sherlock Holmes and Nero Wolf then this is a highly recommended series.  I would give this book a five star.

Click here to buy from Barnes & Noble in Paperback 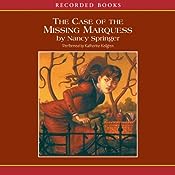