It's about time for some kind of update over here.  Though I haven't been writing a lot lately, I did rewrite a short story I wrote several years ago.  I've posted it to my Facebook page but decided it would probably find a nice home here as well.  I've been advised to submit it to magazines, but I don't think I will.  I've decided to post it here to my blog instead.  I'm not sure anyone will touch it after I post it here, but I don't even know where to begin a search for magazines to submit to.  Here we go... 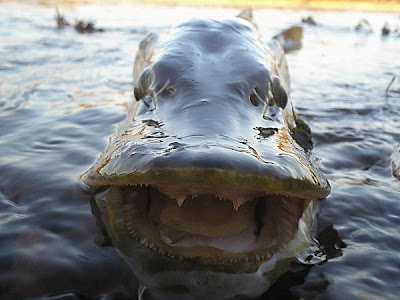 As I was growing up, my father told me the best way to catch a man was learn to fish.


I never gave that piece of advice much thought until after I was married and realized how much of a part it played in my dates.  I was tricked into more than one date with a sly boy by a seemingly innocent offer to take me fishing.


I’m not really gullible, but I have a tendency to be unobservant.
Since getting married and having children, my urge to fish and camp has dwindled and my husband likes to poke fun at me by calling me a fair weather fisherman.


To many, this is a horrible slight, but I endure his slander because I am a true believer in my fishing convictions.  Fishing should be an enjoyable entertainment unless one intends to try to feed a family with the skill.  I stand by that statement with firmly planted feet.


My husband would fish any time of day, anywhere in the world there is water and in any weather.  I suspect it might be just to avoid the fair weather fisherman label.


He does have preferences on what he fishes for, though.  He prefers any fish other than trout.  Of course this is a problem because most of the creeks and lakes around here have nothing but trout with one large exception.

Sixty miles from our home is a damn dam that is home to walleye, pike and tiger musky.


Yes, I did say damn dam because this is the most awful place for humans to visit other than Hell itself.  At least it is on most days.


I haven’t mentioned that I truly do love my husband, even though he sometimes indulges in assassination of my character and is predisposed to pouting when he doesn’t get his way.


For love and to avoid the maddening vision of a pouting man I give in to go to this particular lake more often than I’d like to.


This man made lake isn’t just home to several different species of fish it is also host to almost every biting insect our bountiful earth has to offer.  Also, these biting beasties seem to be immune to bug spray.


Not only have the insects sold their souls but the weather is almost always bad.  High winds, torrential downpours and sweltering heat have all been known to manifest on the shores of this watering hole, all at the same time.

So, with a heavy heart full of stupid love, I gave in once more to my husband’s wishes.


I was prepared to have a miserable day full of bad weather, itchy bug bites and sunburn.  All to avoid the pouting face of the person who was supposed to be my man and the scurrilous title my husband has so lovingly bestowed upon me of fair weather fisherman.


This day was out of the ordinary, however. As we set up our poles along the shore, I noticed the swarms of bugs near the water's edge were not the biting kind, the wind was only a breeze and the ground was dry. I wondered how long this was going to last.


Something that had never bothered me before spending an entire summer driving back and forth to this lake was getting skunked.  I was just happy to sit on shore or walk a creek and fish.  It never used to matter that I might not catch anything.  Not until I spent so much time at this dam being eaten alive, pelted with heavy rain and hail and being blown half across the state.

Yes, I will admit, I was looking for something wrong and had been surly for most of the drive to the reservoir.  But, I’m not evil, I got past my irritation when I realized the plague that was this lake had changed its tune.  Even the annoyance of getting skunked was pushed down.


My seven-year-old daughter can’t resist the water so as soon as our lines were in, so was she.  The poor thing was restricted from splashing because the main objective was to catch fish, not scare them.


We sat around for an hour or so before we saw any movement of the poles then we were hit with a wave of bites. None of us were near our poles when this wave passed so, needless to say, none of us set our hooks and caught a fish. Then the passing school did just that and passed. I began to get frustrated until I glanced at my daughter's pole in time to see her get another bite.


"Hey!" My husband barked to alert us to the situation, but I was already on the move.


My sweet daughter owns a small, four-foot, Zebco fishing pole with ten-pound-test fishing line. For those of you who are not fishermen, it's a child's pole not meant for catching the big one.


I made my way to her pole with high hopes.  Maybe we wouldn’t get skunked.


As I set the hook, I could tell the fish on the other end was worth the effort and by the time I made three or four revolutions with the fishing reel, my daughter was there to do her duty. I handed over the pole and began to instruct her when my husband arrived.  Though I’m just as capable of giving her instruction as he is, this is one task that is Dad’s job and I willingly stepped aside.


“Let her do it,” I said, not really thinking he’d take her position away from her, but knowing the excitement of having a fish on the line makes one want nothing but to get that fish into shore.


She struggled, grunted and whined for a few minutes before my husband hollered once again. This time it was to tell me to reel in our lines because the fish was crossing them. This could cause a major mess and the loss of the fish. So, I ran to my rod and had it almost reeled in before he stopped his instruction and made his way to his own pole. I don't think he turned the crank more than five times before her line snapped.


The sound I heard was something like pssss and the three of us watched as the gossamer line flew across the sky and down into the water. We were all crestfallen but I wasn’t ready to give up just yet.  Her line had fallen very near if not on top of my husband’s line.


Without thinking or hesitation I ran out into the water. I had about twenty feet to cover before I reached the broken line.  No thought entered my mind as my eyes bore into the water where the almost invisible line dropped.  There was no sound but the lapping of the water against the shore and my splashing. Neither my daughter or my husband cautioned me against the dangers of wading out so far.


As I reached the spot where I saw it land, I realized it was only my husbands line nicely curled up on top of the water. Already up to my butt in the ice-cold water and not wanting to admit I’d done something completely unnecessary I started to pull up his line, just in case.

I was rewarded with the end of my daughter's ten-pound-test fishing line and grabbed it.


Seeing I had indeed found the prize, my husband started calling for his rightful duty.


Once again, my well-being was not an issue for any of us. Not only could I have drowned, but as I pulled the line back with me toward shore, I was lucky it didn't cut into my hands.


As I waded out of the water, my hubby took the prize from me. I didn't object and gladly handed the job off to him.  Rational thought had returned as I had trudged back to shore.


He successfully pulled in the fish and her line snapped once more.
Luckily he had it on dry ground and the fish fell to flapping around in the dirt. It was a mean looking tiger musky with a bad attitude.


If you don’t know what a tiger musky is, just let me tell you that it’s not a fish you want to go messing around with.  They have slimy, snake like bodies with a mouth full of large, pointy teeth.  They have been known to attack people in the water.  Of course, this does not happen often, but it does happen.


I once heard a news story on the radio about a man who had been dangling his feet off a boat and had been attacked by a tiger musky.  The fish didn’t let go until after he’d pulled his leg back into the boat and it left a wound requiring sixty stitches.  The poor man, having not yet purchased his fishing license, was not permitted to keep the animal that had injured him.

Around here, a Tiger Musky must be a minimum of forty inches and wouldn't you know it, we forgot our measuring tape.


A nice angler near us sent his boy running with his measuring tool. It was a rigid fish-cleaning block that went as high as ten inches. So, after some difficulty, we agreed our monster was only thirty-one inches long.
We took the required pictures and released our fish for another time.


A man in a boat actually drove as near to shore as he could to tell me "Hey, Lady. If I knew your name, I'd enter you into the fisherman's hall of fame." I laughed but wondered if there was such a thing.


I later asked my husband about it and he replied, "Yes, there is. It's called Liars Corner."